Events » Movie Series: “Who Is The International Working Class Today?”

Movie Series: “Who Is The International Working Class Today?”

There are many discussions today about the nature of the working class and their capacity to fight for their own interests. Usually, we look at history to learn about the workers' movement, but what potential exists in the modern international working class? What does a modern workers’ struggle really look like? What recent examples are there of workers organizing against the conditions they face and exerting their power? Join us in this movie series as we explore these questions by looking at workers' struggles that happened in our lifetime.

In fall 2008, the bursting of the US housing bubble sparked a financial crash that brought the construction industry to a halt. In Chicago, workers at Republic Windows and Doors organized one of the most visible fights during that period. When the company's credit lender, B of A, received a billion-dollar bailout supposedly to rescue small businesses but then cut off credit, the factory owners attempted to close the plant. Instead, these workers occupied it while launching a public campaign to expose the bank profiteers.
This documentary captures the processing of the strategy by the workers (mostly Black and Hispanic, many undocumented and many women) inside the plant during the occupation as well as the public response.  Ultimately, the owner paid a fine and went to jail and the plant became a worker-owned cooperative, but the road to that outcome was long and tricky.
This movie shows the potential of rank-and-file workers to act in their interests and mount a nationally-visible campaign. Armando Robles, President of UE 1110, will join us to talk and answer questions.

Friendly reminder this is a series occurring every two weeks 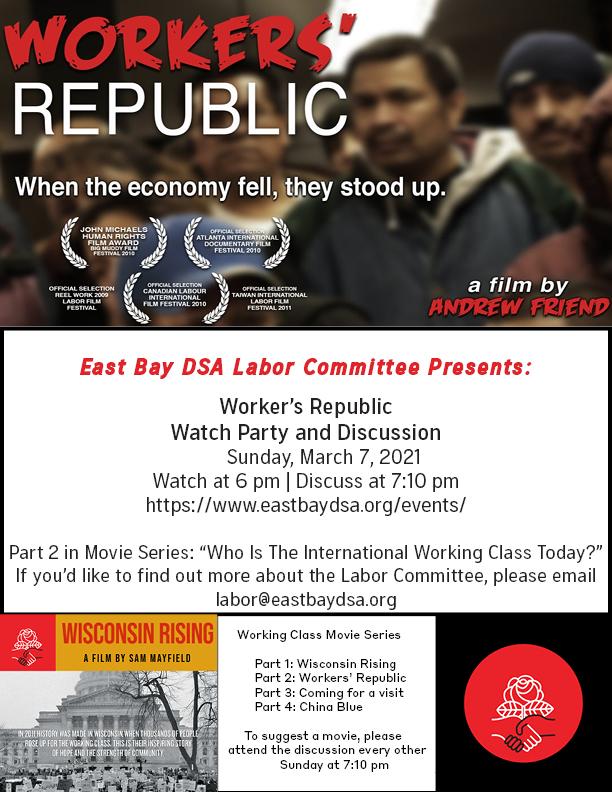 When: March 7, 2021, 6:00pm - 8:00pm
Where: Please join us at 6pm for a brief presentation and to watch via shared screen, and look for zoom and movie link upon RSVP if you prefer to watch on your own. Discussion will start at 7pm
Add to Google calendar / Add to calendar / Subscribe to our calendar