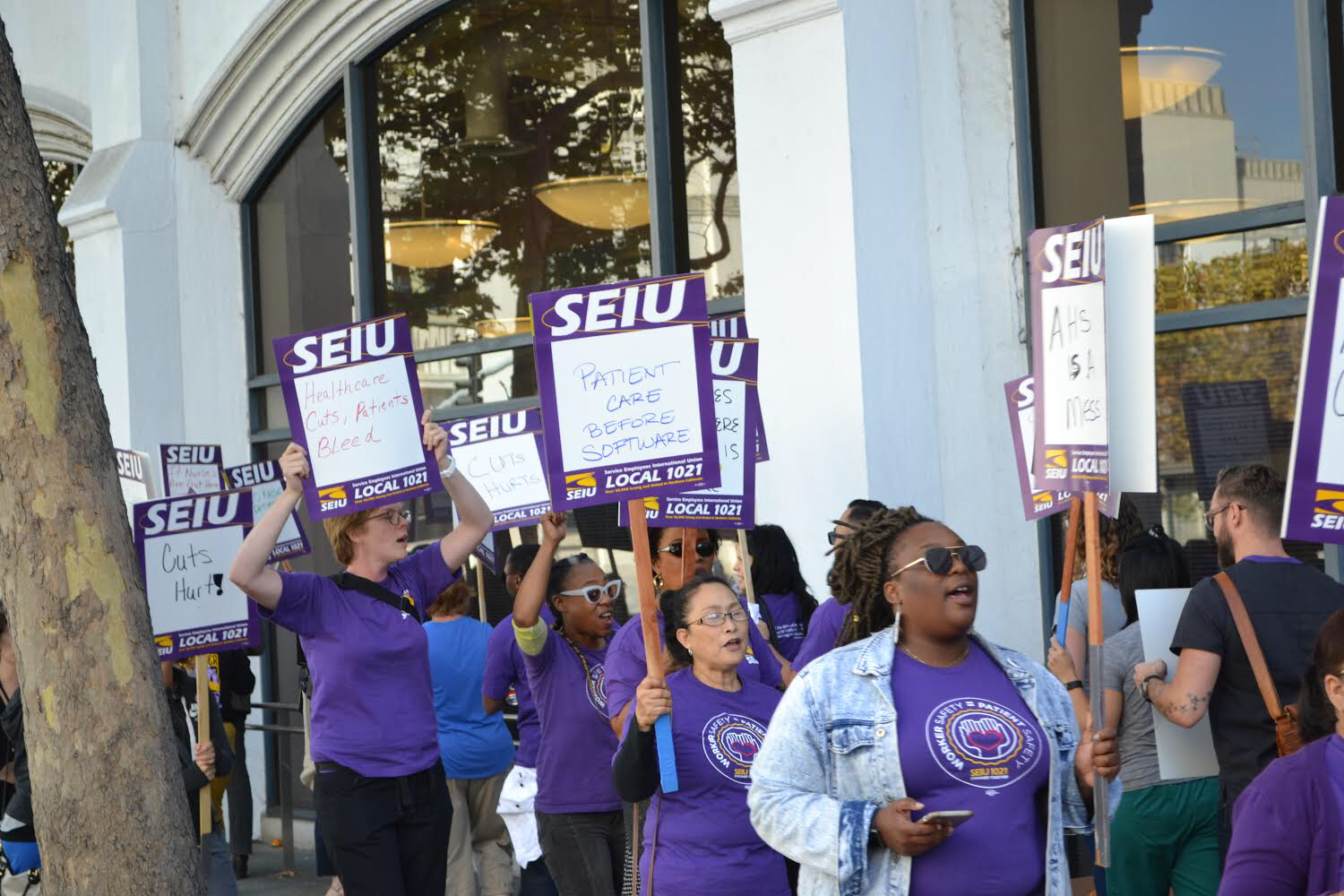 There are flies in the operating room at Highland Hospital. Patients regularly wait for hours, sometimes days to be seen, and the Emergency Department alone is short twenty full time staff. Nurses routinely open drawers to find them empty when they should be stocked with lifesaving equipment, and custodial staff are worked to the bone trying to keep the place clean. This is not the description we expect when we think of healthcare in the wealthiest society in the history of the world. So, how did it happen?

For decades, politicians have been handing out tax breaks to profit-hoarding corporations and the rich. Simultaneously, they have been cutting funding for public healthcare, privatizing our public health system, and leaving it to fester at the hands of incompetent management, nepotism, and corruption. As a result, the public health system here in Alameda County and in counties across the country is grossly underfunded and understaffed. That means unsafe conditions for workers and patients. This is unacceptable, but it's also entirely unnecessary. California is the fifth largest economy in the world, and there is plenty to go around. We need to tax the rich and fully fund a public health system that ensures the health and well-being of every person in our society.

On Tuesday, September 26, a crowd of some 100 people, most of them healthcare workers in Alameda County’s public health system (AHS) represented by SEIU 1021, gathered on Oak and 12th St. in downtown Oakland to demand that AHS and the county reverse a new round of cuts across the system. East Bay DSA members joined healthcare workers on the picket line in front of the the building where the County Board of Supervisors was meeting with the AHS board. As County Supervisors and board members shuffled inside, the crowd chanted. “Unsafe. Unfair. AHS, it's a nightmare!”

Not three weeks prior, workers at AHS had been served termination notices, in blatant violation of the union’s contract. According to the contract, if management wants to lay people off they are required to bargain with the union and prove that they have done everything they can to avoid the layoffs. When this process is followed, the union is often successful at saving workers' jobs. Management's decision to ignore this provision is one example in a broader management offensive at AHS that has followed the Supreme Court's devastating decision in Janus v. AFSCME. This ruling made right to work the law for all public sector unions, dramatically reducing their ability to retain membership and funds.

After a rally in front of the building, featuring speeches from rank and file union leaders and DSA State Assembly candidate Jovanka Beckles, the group marched inside. As they walked up the four flights of stairs to the meeting, they directed their chants at Delvecchio Finley, the CEO of AHS. Chants rang out in the stairwell of “Finley, Finley you can’t hide! We can see your greedy side!” As hospitals and clinics in the health system go short staffed, without basic materials, and patients wait long hours to receive care, Finley takes home an annual salary of $741,800 including a $50,000 "education stipend" and a $12,000 "transportation stipend."

The meeting began with Finley and the AHS chief financial officer giving a report on the finances of the Alameda Health System. When asked on four separate occasions if he thought short staffing was negatively impacting patient care, Finley failed to give a concrete answer, insisting that there are many factors that impact care. He also could not give an answer when asked about wait times in the Emergency Room and, when several ER workers in the crowd said that some patients wait 36 hours for an inpatient hospital bed, he balked at the possibility.

During the public comment that followed, several AHS workers, nurses, housekeepers, and nurses assistants among them, set the record straight.

One registered nurse clearly answered the question that Finley had skirted, saying "understaffing is a breeding ground for mistakes. It's not safe for us or for the patients."

John Pearson, president of the AHS chapter of SEIU 1021, member of DSA's Democratic Socialist Labor Commission, and an activist in East Bay DSA's Labor Committee, is a registered nurse at Highland Hospital. During a statement to the officials gathered, Pearson said that "since the Janus decision, Alameda Health System has been a 'runaway train' with complete disregard for the contract." He went on to say, "patient-care jobs are being cut in a climate of crisis...admitted patients are sometimes in the ER for multiple days in a row before they can get a bed upstairs...We've got a manager telling our nurses that because it's too crowded, sexual assault exams can happen in the conference room."

A certified nurse's assistant spoke next and put it simply when he said, "We are fifteen staff short at our nursing home! How do you expect us to give effective care?"

A housekeeper of twenty years at John George, the county psychiatric hospital, made clear the importance of solidarity to the workers, when she said, "When you affect one, you affect everyone! Whether you are drawing blood or cleaning floors, we are all in this together."

Following the period of public comment, supervisor Wilma Chan insisted that the AHS board and Finley abide by the union's contract. But such calls ring largely hollow given the history of the AHS and the Board of Supervisors. The AHS board, which operates five hospitals and four medical clinics, is an unelected body that was formed and appointed by the Board of Supervisors itself in 1996, with approval from the state legislature. With no mechanism for public accountability by election or otherwise, the AHS board can take all the heat, while the supervisors lean back and claim their hands are tied.

The bottom line is that the health system must be brought back under public control, made democratically accountable to its workers and patients, and be fully funded by taxes on the rich. The narrative of scarcity these officials claim as a roadblock is laughable. California is home to 144 billionaires with a combined net worth of nearly one trillion dollars, and many of them live right here in the Bay Area. These are people who have gotten rich off the labor of working people, and it's about time that the fruits of that labor were returned to its rightful owners.