We Need a Green New Deal to Stop California’s Wildfires

As Hurricane Laura hits the east coast, in some places registering the highest wind speeds ever recorded, we here in California are once again in the grip of ferocious fires that make our air too toxic to breathe and put millions of people under threat of evacuation. We are losing more than a million acres of forests, hundreds of homes, and many lives. As these fires increase in frequency, intensity, and damage dealt, we can no longer call them “natural” disasters. The profiteering fossil fuel industry and fossil fuel-backed politicians' inaction on global warming has made almost every recent fire season worse than the one before. If we continue on this path, California will be even drier and hotter in the coming years, and the fires even deadlier.

Our lungs are burning. We are heartbroken and furious — yet again watching friends, families, and communities lose everything they have, and this time in the midst of a global pandemic that attacks the respiratory system.

We - the working class, the public - have had enough. 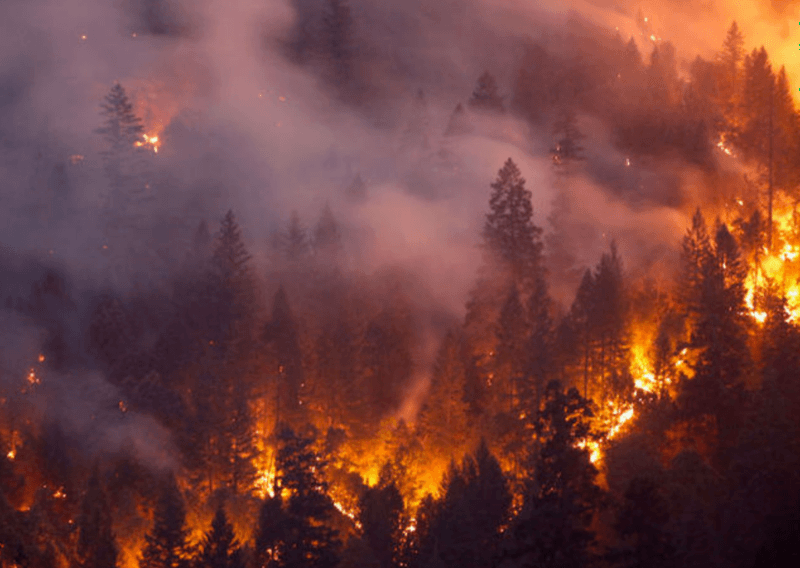 This is not fate, and it is not natural. We refuse to accept the overlapping crises of climate collapse, pandemic, racial oppression, police and ICE terror, mass incarceration, mass evictions, and poverty as inevitable, and we reject the profit-driven system — capitalism — that created them. In order to mitigate the suffering from California’s fires and other climate disasters and create a world of abundance and prosperity for all, we need a radical Green New Deal that prioritizes people and the planet over the profits of a wealthy and powerful few.

State officials in Sacramento and federal officials in Washington are dramatically unprepared to fight the fires. California politicians and profiteers have built a system that in part relies on incarcerated firefighters — a disproportionate number of them poor, Black, Indigenous, and People of Color. The state pays starvation wages for the dangerous and vital work of saving lives. Avoidable COVID outbreaks in prisons have exacerbated the shortage in firefighting resources, with only 30 of California’s 77 incarcerated firefighting crews available to combat one of the worst fire seasons in the state’s history. Elected politicians are again exposing themselves as representatives of corporate and military interests rather than of the majority.

The impacts of these fires are not felt equally. Climate disasters heighten existing racial and economic inequalities. Communities of color are already at higher risk of health issues such as asthma and cancer due to decades of corporate, military, and political decisions to pollute their land and water. Toxic smoke-filled air and limited options for safe evacuation further endanger these communities each fire season. COVID only makes things worse. Historic levels of unemployment and an affordable housing crisis have left many without homes to adequately shelter from the smoke. A radical Green New Deal would integrate oppressed minorities into the process of resolving the climate crisis, in stark contrast to their exclusion under capitalism. A beginning point would be learning from indigenous reservoirs of knowledge, as by systematically adopting wildfire management techniques native tribes have successfully used for centuries before colonization.

We are thought to be the richest society in world history, yet spend less than many others in forest- and fire-related infrastructure. Our firefighters are heroically doing their best to combat this unfolding tragedy, but the real work has to happen before there are fires — in prevention, smart forest management, relocation and hardening of infrastructure, and, most importantly, immediately halting the spew of greenhouse gasses.

We cannot afford to lose any more time waiting for technocrats or politicians to act. It is abundantly clear that neither major political party has anything close to an adequate plan to salvage a livable planet for us and future generations. We know now, more than ever, that market mechanisms, Wall Street investors, and our current politicians — in short, capitalism — are not up to the task.

But we are! The DSA, Sunrise, youth climate mobilizations, and other groups and communities are fighting to implement a radical Green New Deal that will take away wealth from corporate and military interests, and invest it in things that we all need for a good life: a just transition to clean energy, fire prevention, COVID response, universal healthcare, education, safe and well-paying jobs, abundant social housing, fresh air, and clean water.

The East Bay DSA assists this national effort by working to build a just, safe, and ecosocialist future. Join us to fight against climate atrocities and care for our neighbors through work like:

We won't be able to get the lives we've lost back, but it's not too late to mitigate the worst scenarios of climate apocalypse, and we will need all of us fighting together to do it.

The time to act is now.